Dino Marcantonio - Parts of the Church Building: The Altar Rail

An article over at NLM by Shawn Tribe....


I recently noted that architect Dino Marcantonio has continued his "Parts of the Church Building" series which he sets within the context of a discourse by St. Germanus of Constantinople (ca. 641-733 A.D.) -- you may wish to read Benedict XVI's own discourse on St. Germanus himself, given April 29, 2009, which also includes some liturgical considerations.

Here is an excerpt from his most recent entry:


Parts of the Church Building: the Altar Rail

Continuing our series on the parts of the church building, St. Germanus goes on to say:

8. The entablature is the legal and holy decoration, representing a depiction of the crucified Christ by means of a decorated cross.

9. The chancel barriers indicate the place of prayer: the outside is for the people, and the inside, the Holy of Holies , is accessible only to the priests. The barriers, made of bronze, are like those around the Holy Sepulchre, so that no one might enter there by accident.

An entablature is a decorated beam supported by either a wall or at least two columns. (More on that here.) In this case, it is supported by columns as St. Germanus is referring to the barrier dividing the nave from the chancel, or sanctuary. In fact, the word chancel derives from the Latin word for gates, cancelli (pronounced kan-chelly).

However, St. Germanus is not describing what we call a chancel screen in the West. A chancel screen separates the nave (the area traditionally reserved for the laity) from the choir and the sanctuary (the area traditionally reserved for clergy). The barrier St. Germanus describes separates the sanctuary from the choir. It is the boundary of the Holy of Holies, and is the forerunner of the eastern iconostasis and the western altar rail. 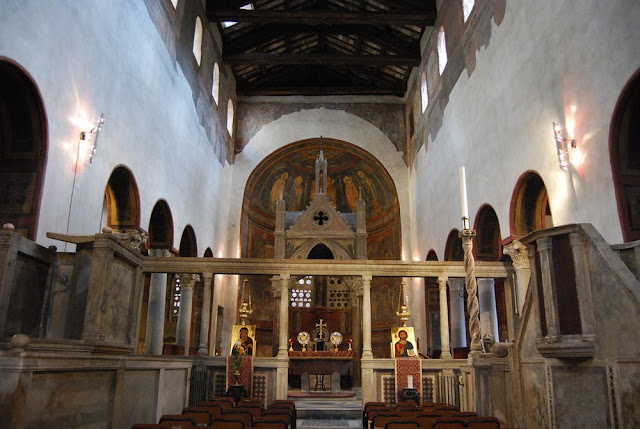 A view from the choir looking toward the
sanctuary at Santa Maria in Cosmedin, Rome.
Columns and entablature atop the low wall,
or templon, mark the boundary of the sanctuary.
In antiquity, curtains hung between the columns

Read the remainder of the piece here: Parts of the Church Building: the Altar Rail - Dino Marcantonio, Architect.

While inviting you to read the remainder there, I cannot resist showing you this image, which Dino shares later on in his article, of the beautiful Church of Elijah the Prophet in Yaroslavl, Russia. 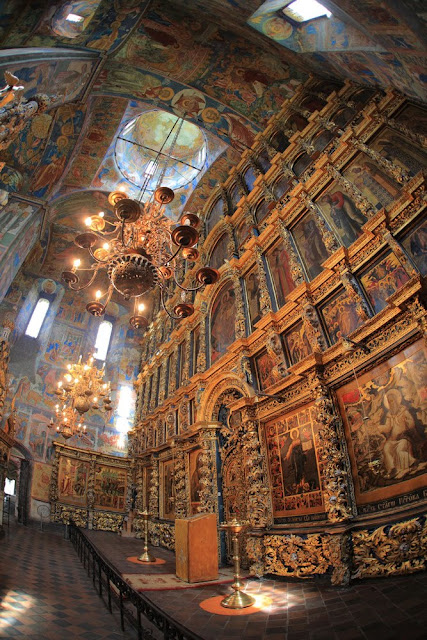